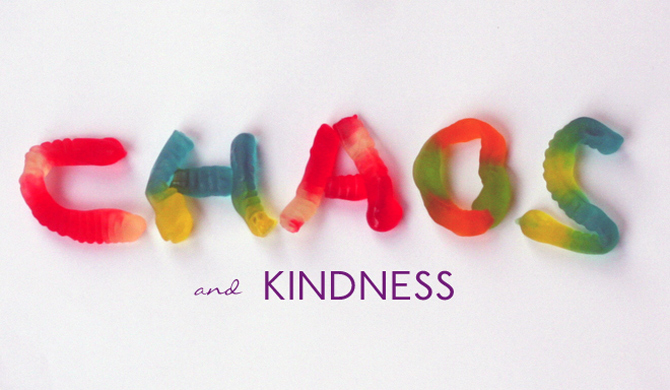 Originally published in 2010 & excerpted from the New York Times Bestseller Carry On, Warrior.

I’m at Target yesterday with Tish and Amma. We’ve made it through the shopping part and we’re in the check- out line. I can see the Promised Land, which is: We’re Done Shopping, Let’s Go Back Home.

I watch Amma notice a pack of gummi worms. Her eyes widen. I brace for chaos. She grabs the worms, shows them to me with tears already in her eyes and says, “I need dese worms!” I say, “Uh-huh. That’s the curse of Target. It makes me think I need all this junk, too. The Target curse is why you’re not going to college, baby. No gummi worms. Put them down.”

Now. You know I try my hardest to describe my ridiculous little life to you. But there is no way to convey to you the drama that crashed down on poor unsuspecting Target immediately following the word “No.”

This was a long, crowded line. And every time the line scootched up I had to grab Amma’s hood and drag her forward a few feet while she kicked and screamed, like I do with my luggage in the security lines at the airport. And then Tish started crying because it was all so ridiculous. And so I gritted my teeth and made my scariest face at Tish and growled STOP at her like some kind of movie monster, and this sort of thing does not tend to calm a child down. So she cried harder. People started moving away from us and shoppers were actually stopping by our aisle to stare. I was sweating like I was in a sauna, and wishing the “It’s the Most Wonderful Time of the Year” song that was on replay would just end. With the kids jinglebelling and everyone telling you, be of good cheer! Riiiight. My experience exactly.

Up until this point, I kept my head down, but it seemed time to offer my best beleaguered, apologetic, what are you gonna do? looks to the other shoppers, in hopes of receiving some sympathetic looks in return.

But here’s the thing. When I finally looked up, I realized with mounting discomfort that there weren’t gonna be any sympathetic looks. Everyone was staring at me. Every. One. One elderly couple looked so disturbed that the grandmother had her hand over her mouth and was holding tight to her husband’s arm. At first it appeared to be an effort to shield herself from my rabid animals. And I thought, I hear ya lady, they scare me, too. But then I realized that she wasn’t looking disapprovingly at them, she was looking disapprovingly at me. I locked eyes with her and without subtlety, she looked down at my clothes, then to my cart, and then away.

So I did the same thing. Down at myself, then to the cart. Oooooooohhhh, I thought. Shoot.

My stupid Lyme is back, and I’ve been sick for a little while now. Yesterday was a bad Lymie day, and so was Wednesday, so I may have forgotten to shower or brush my hair. For 48 hours. And also, when I looked down I noticed that I still had on my pajama top. Which apparently I had tucked in to my ripped jeans. Like seventh grade. I looked bad. Not like a little bad, like offensively, aggressively bad. And also, here is what was in my cart: 6 large bottles of wine and curtain rods. It appeared as if perhaps I was planning to build a wine bong. Which wouldn’t have been so bad if my smallest child would have stopped screaming: “I SO HUNGWY, I SO FIRSTY!”

And since I was so tired and in such a state of self pity – I couldn’t even bring myself to feign sympathy towards my starving, parched child on the floor. Because I wasn’t sympathetic, not even a little bit. I definitely remembered feeding her the previous day. Faker.

But based on all of these things, I decided to forgive the frowny, judgmental lady. I had really left her no other choice.

All of a sudden, a uniformed police officer started walking toward us. At first I was alarmed and defensive. But he stopped in front of me, smiled warmly and winked at me.

He looked down at the girls and said, “May I?”

I was not sure what he was asking exactly, but I allowed myself to hope that maybe he had a paddy wagon and was planning to take them away. And so I nodded at him.

The police officer patted Amma on the head gently. She looked up at him and stopped mid-scream. She stood up. Tish fell silent and grabbed Amma’s hand. All of a sudden they became a pair of grubby little soldiers. At attention, eyes shining, terrified.

The police officer said, “Hello girls. Have you two ever heard of “disturbing the peace?”

They shook their little heads no.

He smiled and continued, “Well, that means that your mama and all of these people are trying to shop in peace, and you are disturbing them, and you’re not allowed to. Can you try to be more peaceful?”

They nodded their little heads yes.

The officer stood back up and smiled at me. I tried really hard to smile back to show my gratitude.

I noticed that the girls grabbed each other in a bear hug and held on for dear life. It appeared they had lived to die another day.

He said, “Being a parent. It’s a tough gig sometimes.”

For some reason, I became desperate to be perceived by him as something other than a struggling mom, so I blurted out, “I’m also a writer.”

He looked genuinely interested and said, “Really? What do you write?”

“Lots of things. Mostly a blog.”

His eyes twinkled and he grinned and said teasingly, “Oh. Does anybody read it?”

I miraculously found the energy and ability and space and breath to giggle.

And my officer smiled and said the following:

Then he tipped his hat to me and my girls, and walked away.

In the end, only kindness matters. Thank you, Officer Superhero. Merry Christmas.

The girls were silent until half way home from Target when Tish announced loudly, “I can’t believe we almost went to jail. We better not tell daddy.”

And I said, “No way. We have to tell him. What if we don’t and then he sees the report on the news tonight?”

Joy to the World.

Originally published in 2010 & excerpted from the New York Times Bestseller Carry On, Warrior. 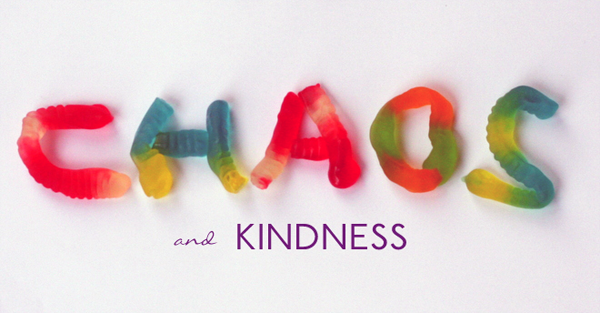 ← PreviousRethinking the Perfect Holiday
Next →On Strong Families, Strong Sisterhood and Strong Coffee