The fact that Kate called me from college during the middle of a business meeting, which I was leading but which I interrupted to answer, was odd enough.

Her questions were even odder.

“I have Sunday off and I’m going to the city to have lunch with Aunt P. I was wondering if you know of a good place to eat in her neighborhood. Also, I want to go to the cemetery and place flowers on Grannie’s grave and I don’t know how to get there.”

On the surface, there are easy answers to Kate’s questions. But my sweet daughter unknowingly unleashed a hornet’s nest of angst in two simple sentences — so much so that I excused myself from the meeting to step outside, where stepping outside equals stepping into the vast wasteland of my emotion on the topic of my sister.

I’ve had what can politely be described as a “difficult” relationship with my sister. At the time of my mother’s death nearly four years ago, she and I were estranged for reasons not necessary to detail here but related to her lifetime of addiction and my lifetime of carefully cultivated anger. Right before my mother passed, Mom said very little other than she’d had a good life and she wasn’t afraid to die. But she had a final request: “Please stay close to P,” she asked quietly. “She doesn’t have anyone and she needs you.”

Let me tell you — I could write an irrefutable essay on why deathbed requests should be immediately outlawed, but that’s not the point of this story.  To those living and those departing, deathbed requests are an unfair entreaty, or at least that’s how I felt after eight weeks of being the only family member holding vigil at my mother’s side during her final illness. But faced with my mother’s last request to do the one thing I knew I couldn’t do, I did what any loving daughter would do.

Six months later, I moved out of state. I moved for a lot of reasons, but being five hours away from my sister was surely at the top of the list.

And, now, here was my daughter, away at college and willing to drive two hours to have lunch with her aunt, whose calls I mostly don’t answer and whose texts I only occasionally return. I’ve always believed the universe sends people signals when they most need them. On this day, I thought the universe must be drunk, too. I didn’t like this signal and it surely was nothing more than a kind of cosmic glitch, an errant sign that had nothing to do with me.

But I took a deep breath and answered my daughter’s questions amid the traffic noise outside my office. I was surprisingly composed but unsurprisingly terse. I told her my sister lives in a terrible neighborhood and there’s no decent place to eat within miles of her house. But don’t take her anywhere fancy, I cautioned, because she looks like a homeless person. And don’t bother going to the cemetery because the grave is still unmarked and you won’t be able to find it. It’s a long story, I said, with the kind of exasperated tone that made it clear the failure to buy a headstone had everything to do with my sister’s broken promises.

It was the worst kind of explanation a mother could give a daughter, especially one as good-hearted as mine. It was shameful, really, but it was all I had. Love didn’t exactly win at that moment.

You know — those of us who are fans of Glennon would break a leg to meet her. I adore Glennon, but you know who I really want to meet? I want to meet Glennon’s Sister. I want to pull Sister aside and ask how she managed to be Sister to the Drunk all those years. Because during my sister’s awful, horrible years when she stole my car and my money and my jewelry and found every way humanly possibly to hurt my mother and nearly got herself killed, more than once by a drunken male companion — I stayed the hell away.

I made sure P knew she was not invited to my wedding. I made my mother promise not to take my children around her. When she was sent to jail, many times, I never bothered to ask where or why or for how long. I refused to visit her in the hospital after she was nearly beaten to death with a steel pipe until my mother tearfully begged me to go, after which I stood in the doorway of her dingy hospital room because I wasn’t brave enough to cross the linoleum abyss between my anger and her pain.

You know, for as hard as it must be to be Drunk — and Glennon has given me so many insights into that experience — it’s also hard to be Sister. I’m not making excuses, I’m just saying sobriety, especially my kind of protective sobriety which looks a lot like furious disapproval, is hard, too. The addicted and the sober — we’re like two jagged stones tumbling down a dirt road, crashing into each other and knocking off our smooth edges, unintentionally making each other sharper and scarring up the soft earth around us. We might be doing the best we can, the only ways we know how — and for Pete’s sake we ought to give each other a break given the circumstances — but it’s so ugly and so painful we don’t know what to do so we just keep tumbling.

Surprisingly, though, after my mother died the anger I had nurtured about my sister over so many years began to fray in a way that startled me. The unraveling of what had safeguarded and sustained me, the tattering that had moved beyond the edges into the center of my tightly woven gall, left me unsteady, as if I had lost the only emotional compass that worked for me with P. I sought a counselor’s assistance because the problem with losing your anger is that it’s not immediately replaced with an emotion you know how to work with.  The absence of fury doesn’t create compassion.  It’s something more like benign forbearance, which isn’t particularly conducive to family reconciliations. The counselor advised me to set the boundaries I needed to protect myself, but to commit to taking action in keeping with my values. Apparently the boundary I needed was 300 miles wide.

I figured I’d think about the values part later.

You know, my husband has this theory that the incarcerated aren’t the only ones in prison. He believes the wardens — and the System that retains them — are locked in the same dreadful dynamic, and the keepers aren’t any more free to leave than the criminals. Who’s to say which side of the bars is more subjugating, he asks?

His insight resonates with me because I haven’t known for a long time who’s on what side of what jail, P and me. She’s paid a steep price, including her health, a good bit of her sanity, and an unbreakable tether to her daily dose at the methadone clinic.

But I’ve paid a price too, one I’m just beginning to calculate. I’ve never believed in a literal hell but I can tell you hell away is a torturous place, maybe exactly what God warned us about, but so close to our noses that we humans couldn’t see it and instead we told stories of fire and brimstone because, you know, speck in her eye.

I don’t have a tidy answer today. I know P loves me, because she never fails to tell me. I know I love her too, because I am starting to let myself feel it, no matter how hard I try to resist and how few times I say it. I know we are sisters because we are breathtakingly imperfect in our sameness and because a million years ago, when she was 16 and I was 6, we rode around in the car together, the windows rolled down and the am radio playing Janis Joplin, who taught us “Freedom’s just another word for nothing left to lose.”

The lyrics held true for her and I suddenly think they have held true for me, too.  Maybe we were destined to spiral downward together, to plumb the depths of our souls in tandem until she hit the rock bottom of reckless addiction and I hit the rock bottom of hardened sobriety.  The landing always hurts, I suddenly realize, but there’s comfort in finding hard ground, in stopping the free fall.

Who knew we would be emancipated together 45 years later?

With gratitude {for daughters, sisters, and second chances},
Joan, but, like my sister, you can call me JM

Joan Nesbitt is a hopeless existentialist, relentless gratitude seeker, little-known blogger, and recent empty nester. She spends her days working in philanthropy and her evenings pursuing crack-pot domestic obsessions such as rendering lard for the perfect pie crust. Joan spent four years of her youth performing in a local Clown Troupe and believes learning at an early age to juggle and entertain finicky audiences was the best possible training for a working mother. You can find Joan on her blog, Debt of Gratitude, and on Twitter and Instagram.

This post is part of Momastery’s Our Messy, Beautiful Summer series. 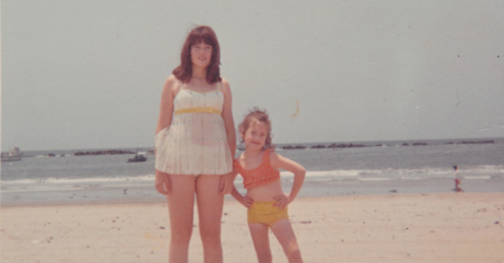 ← PreviousI lost my brother to alcoholism, and I am an alcoholic, too.
Next →Throwback Thursday: Fifteen