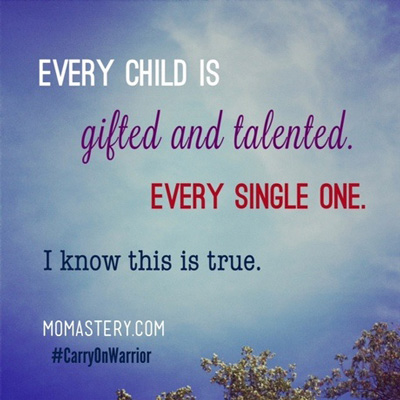 In a group of neighbors, Atticus was standing with his hands in his overcoat pockets. He might have been watching a football game. (*He was actually watching the house next door to the Finch home burn to the ground.*)

“See there, he’s not worried yet,” said Jem.

To Kill a Mockingbird

Last week, one of my mama friends called to tell me a story. Her daughter had come home from school and while she was eating a snack she said, “Mom, I’m sorry but I’m not gifted. They sent home letters today to the gifted kids. I’m not a gifted kid.”

Let’s  talk about that.  I have some thoughts, and so I’ve just sent up a Twitter prayer to the G-O-D that it’ll all come out right. Sometimes I know something to be true, down deep in my bones, but when I try to turn it into words, it changes. Gets all jacked up. Like how blood is blue till it hits oxygen and turns red. Which is why I predict we’d be better off if people talked less and just quietly knew more. She said, as she wrote her 3,670th blog post.

Here I go. I’d like to talk to you about your brilliant children.

Every child is gifted and talented. Every single one. Everything I’ve ever written about on this blog has been open for argument, except for this one. I know this one is true. Every single child is gifted and talented in a particular area. Every single one also has particular challenges. For some kids, the classroom setting is the place where their genius is hardest to see and their challenges are easiest to see. And since they spend so much time in the classroom, that’s a tough break for these little guys. But I know that if we are patient and calm and we wear our perspectacles and we keep believing, we will eventually see the specific magic of each child.

Like my student who was severely dyslexic and also could’ve won Last Comic Standing at age seven. “Hey, Miss Doyle. Were you really busy last night or something?” Yes, actually, I was. Why do you ask, Cody? “Because your hair’s actually the same color it was yesterday!” The boy was a genius.

Like my precious one who couldn’t walk or speak because of his severe Cerebral Palsy, but whose smile while completing his grueling physical therapy inspired the rest of my class to call him the “bravest.” Genius, that kid.

Like my autistic little man, who couldn’t have hurt another living being if somebody paid him to. He was the most gentle soul I’ve ever known. And he loved animals like they were a gift made just for him by God. Which, of course, they were. But nobody in our class knew that but him. Undeniable Genius.

Like my third grader who read like a kindergartener and couldn’t add yet. But one day I stood behind her at recess, where she played all alone, and heard her singing to herself. And that was the day I discovered her gift. It was also the day that she discovered her gift. Since I FREAKED OUT. And marched her over to the rest of the teachers to make her sing for them. And announced to the class that we had a ROCK STAR in our midst. And she quietly beamed. And she sang all the time after that. All the time. Actually, it was a little much. But we let it slide because you don’t mess with artistic genius.

Or the little man in one of Chase’s classes who was always getting in trouble. Everyday, getting in trouble. And Chase came home one day and said, “I think he’s not listening because he’s always making pictures in his head. He’s the best draw-er I’ve ever seen. He’s going to be famous, I bet.” Chase was right. I’ve seen this kid’s work. Genius.

Or my little one who was gifted in learning the classroom way, and was miles ahead of the other kids in every single subject. But had challenges being kind and humble about her particular strengths. So had a lot of trouble making friends. Sometimes it’s tough to be a genius.

Every single child is gifted. And every child has challenges. It’s just that in the educational system, some gifts and challenges are harder to see. And lots of teachers are working on this. Lots of schools are trying to find ways to make all children’s gifts visible and celebrated.And as parents, we can help. We can help our kids who struggle in school believe that they’re okay. It’s just that there’s only one way to help them. And it’s hard.

We have to actually believe that our kids are okay.

I know. Tough. But we can do it. We can start believing by erasing the idea that education is a race. It’s not. Actually, education is like Christmas. We’re all just opening our gifts, one at a time. And it is a fact that each and every child has a bright shiny present with her name on it, waiting there underneath the tree. God wrapped it up, and He’ll let us know when it’s time to unwrap it. In the meantime, we must believe that our children are okay. Every last one of them. The perfect ones and the naughty ones and the chunky ones and the shy ones and the loud ones and the so far behind ones and the ones with autism.

Because here’s what I believe. I think a child can survive a teacher or other children accidentally suggesting that he’s not okay. As long as when he comes home, he looks at his mama and knows by her face that he really is. Because that’s all they’re asking, isn’t it?

In the end, children will call the rest of the world liars and believe US.

So when they ask us with their eyes and hearts if they’re okay. . . let’s tell them:

Yes, baby. You are okay. You are more than okay. You are my dream come true. You are everything I’ve ever wanted, and I wouldn’t trade one you for a million anybody elses. This part of life, this school part, might be hard for you. But that’s okay, because it’s just one part of life. And because we are going to get through it together. We are a team. And I am so grateful to be on your team.

And then, before we dive into “helping.” Let’s just eat some cookies together and talk about other things. There are so many other things to talk about, really.

And then our kids will see that we are like Atticus Finch . . .  Hands in our pockets. Calm. Believing. And they will look at us and even with a fire raging in front of them they’ll say, “Huh. Guess it’s not time to worry yet.”

**A version of this essay appears in Carry On, Warrior:  The Power of Embracing Your Messy, Beautiful Life.** 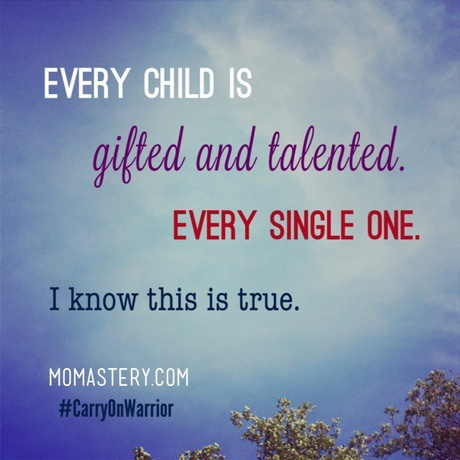 ← PreviousBroken is the Beginning
Next →Just One Toe