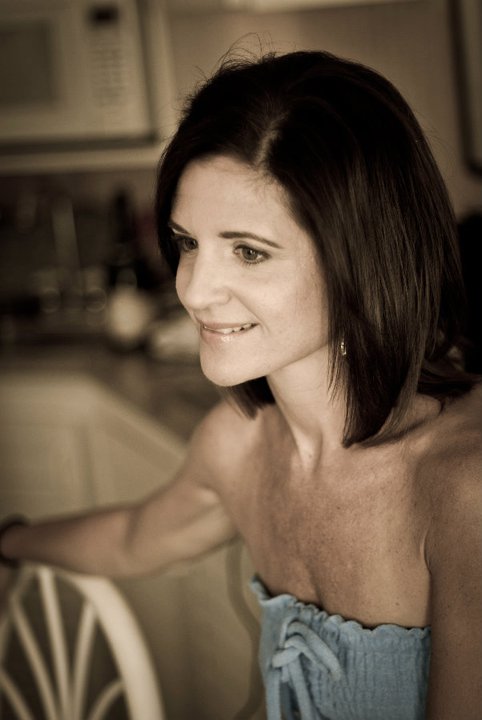 I spent some time in a mental hospital during my senior year of high school. I’d been a horrible bulimic for eight years and therapy wasn’t helping, especially since I spent most of my therapy sessions discussing how fine I was and how lovely the weather was. And one day during my Senior Year, I ate too much at lunch, and I thought I was going to die. Because to me . . . full =death. But I couldn’t find a place to throw up. And so finally, right then and there, in the middle of the Senior Hallway, I decided I was not fine – not at all. And I walked into my guidance counselor’s office and I said: “Call my parents. I need to be hospitalized. I can’t handle anything. Someone needs to help me.”

Here is a picture of me that was taken the week before I was hospitalized. I’m there in the Blue Suit. 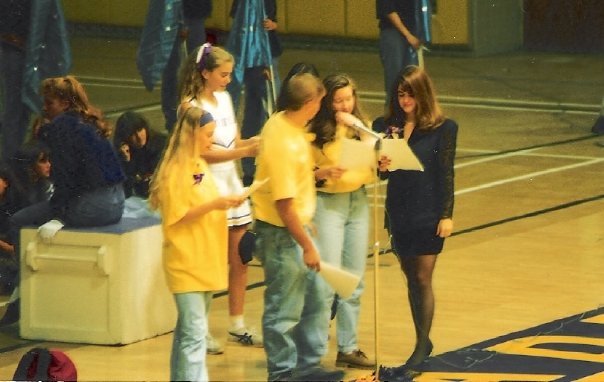 I was a student government officer to a class of close to a thousand. An athlete, too. Relatively pretty. Smart. Seemingly confident. My Senior superlative was “Leading Leader.” In this picture I was co-hosting the Homecoming Pep Rally for the entire high school. Wearing the corsage to show I’d just been nominated for Homecoming Court. People who need help sometimes look a lot like people who don’t need help.

And so that counselor called my parents, and they came right away. And they found a place for me to get help. I often think about what that day must have been like for them. Maybe they desperately wanted to say No, No it will be okay! Not a hospital! We are your parents! We can fix this! But they didn’t. The moment I became brave enough to admit I needed help they believed me, and despite the shock, the pain, the stigma . . . they gave me the exact help I asked for.

I’ve never written about my hospital stay before, because a whole lot is fuzzy, and I can’t get a real grip on the memories. Back then not many specialized eating disorder hospitals existed, so the one I went to was a real mental hospital. There were only two of us on the unit with eating issues, the others were there because they were mildly schizophrenic, drug addicted, depressed or suicide risks. Many of them had violent tendencies. I do not remember being afraid of any of them. I do remember being afraid, in one way or another, of most of the people in my high school.

There was one man on our unit who spoke only in numbers. I ignored him at first . . . it’s hard to know what the appropriate response is to “Twenty-one ninety-six forty NINE?” But one day I decided to take a guess. “Fourteen?” I responded tentatively. I remember his face changing from empty to surprised to happy. Then back to empty, quickly. But I definitely saw happy, for a moment there. That taught me to try, at least once, to speak each person’s special language.

There was a sandy haired girl who always hung her head so low that I never really saw her face. I do remember what her arm looked like, though, because it was sliced up like a pre-cut ham. I saw it up close because I held her hand once when she started crying during a therapy session. She pulled it away at first but then she offered it back to me a few moments later. I remember that her hand was very cold, but it warmed up after a while. I don’t remember her name. I do remember her story and it was very, very sad. She was right to be crazy.

There was my roommate. I will call her Mary Margaret. Unable to speak with my little Sister, I allowed Mary Margaret to take Sister’s place for the weeks I was hospitalized. We whispered long into the night, every night. Mary Margaret was from a tight knit, fiercely loving family too, and we wondered aloud for hours how we ended up in that room together. One night, very late, we wrote vows that said we promised to take care of each other forever. We both signed the vows, with crayons because we weren’t allowed to have pencils. Mary Margaret made me promise not to eat the crayons. I told her maybe she should. We laughed. Mary Margaret was eighty pounds during her stay. She used to hide her food in her huge sweatshirt at lunch time and sneak it to me when we got back to our room. Mary Margaret and I saw each other once in the real world and then never again. We did not honor our vows to take care of each other forever. I’ve never looked for Mary Margaret, I’ve never even Googled her name. I’m too afraid. I know the survival statistics for anorexics.

There was art therapy and dance therapy and group therapy. It all made sense to me. The things the other patients said made sense to me, even though they weren’t things that my peers in my real life would have ever, ever said. Everyone had to listen to each other. There were rules about how to listen and how to respond. There were lessons about how to empathize and where to find the courage to speak. All the lessons made sense to me. I enjoyed them much more than my high school classes. They seemed much more important to me. We learned how to care, about ourselves and about each other.

There was the field trip we took to the art museum in Washington D.C. We rode into the big city on a small bus, we mental patients.We had a special appointment time at the museum, our own private tour. Because there were other groups and we weren’t to mingle with the normal people. I remember thinking that was probably best. We had a rule that we would all need to hold hands. In a long line. Like an extremely motley and sedated Conga Line. Throughout our entire tour.

I remember wondering why Mary Margaret and I had to hold hands with the group. We were relatively well behaved. We’re people pleasers, we bulimics and anorexics. I thought maybe our therapists were concerned that I would run away and attack the diners in the cafeteria and that Mary Margaret might run away with me and stand there and starve.

Then I remember walking by the museum cafeteria, and seeing twenty slices of pie revolving around on one of those buffet lazy susans. And I remember suddenly feeling very grateful that my hands were being held. I felt safe.

That’s what we all wanted. Safety -someone or some structure that would save us from ourselves, from the strange real world that others seemed to be navigating so flawlessly and we just couldn’t, at the time, for whatever reason.

And I remember trembling the morning of my release. I remember knowing I wasn’t ready, and knowing I had to go anyway, because I would never be ready. Because inside the hospital was so much easier and safer and surer than outside the hospital. And I knew I could get much too comfortable. Much too safe.

Because it all made sense to me in there. And that was a little confusing.

I’ve never done this before, but I’m going to go ahead and publish this without editing it first. I’m afraid that if I edit it at all, I’ll edit out all of it.

Glennon
2012-01-10
← PreviousWe Call These Y,TRH Posts (Yes, This Really Happened)
Next →Whatever, Honestly